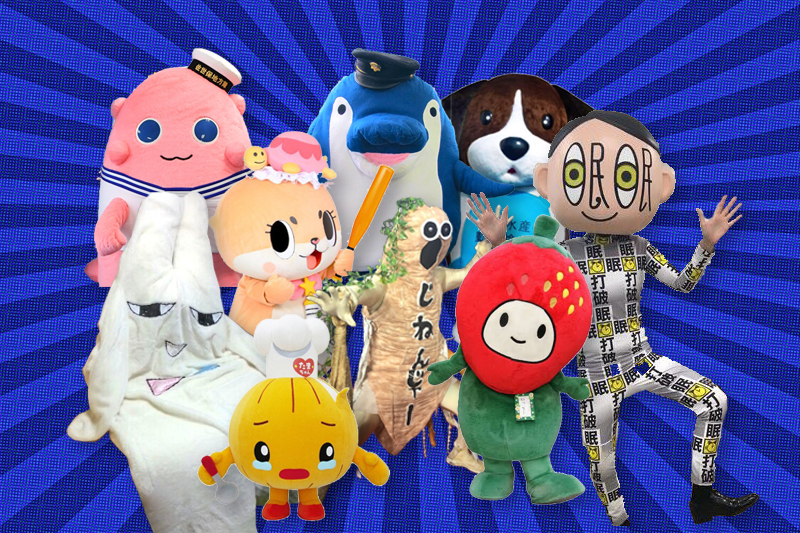 Limbs akimbo and face locked in an eternal scream, he defies explanation of science. He lurks in the dark corners of dreams.

He wants me to visit the picturesque Shiroi City in Chiba prefecture. 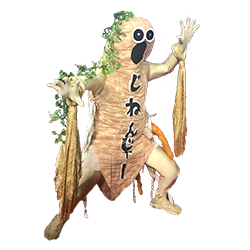 Meet Jinenger, the anthropomorphic mountain yam who serves as the unofficial (more on that later) mascot for the small city of Shiroi.

Jinenger isn’t alone, which seems like a terrifying thought. But the terror he inspires is fortunately the exception, rather than the rule among the yuru-kyara (pronounced YOU-rue-ka-RA), a popular Japanese practice that blends marketing, whimsy, cuteness, and—occasionally—abject horror.

The popular blog and social media feed, Mondo Mascots serves as a great storehouse for photos of these mascots with a touch of context.

Yuru-kyara (a shortening of a phrase that roughly translates to “mascot characters” or “loose, laid-back characters”) are used throughout Japan to represent towns, regions, organizations, events, and sometimes, just concepts.

While this sounds ordered and satisfying (a mascot for everything, for everything a mascot), there is another, more anarchic and intriguing side to the yuru-kyara.

See, for as many mascots are made by governments and companies to represent, at least as many unofficial mascots wander the streets. Some are designed to reflect some meaning. Most, though, stand for nothing more than papier-mâché, felt, and chaos.

If you know a little about Japanese history, you might liken these mascots to the ronin, leaderless samurai who wandered the countryside. Others may point out that (just like errant knights in Europe), the ronin were often brigands, thieves, and oppressors.

The thing is, when it comes to the mascots, both are correct.

That is part of what makes the yuru-kyara so fascinating. You get the lawful, upstanding mascots, who just want to be cute and tell you about public health campaigns or real estate brokers. Then there are the rebellious mascots who stand only for themselves.

Add in the fact these characters wander the streets, interact with each other, and sometimes supplant one another, and you have something akin to a fuzzy soap opera.

Let’s take a look at some of the most effective, surprising, and unconventional yuru-kyara who could be standing right behind you at this very moment. 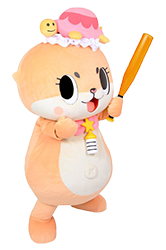 Chiitan started life as the self-appointed, unofficial mascot of the port city of Susaki, they are an otter who is also a fairy baby with a turtle for a hat. Susaki had two official mascots already: a yuru-kyara named Shinjo-kun (an extinct river otter with a bowl of ramen on his head) and a real-life otter also named Chiitan. The actual otter gained enough popularity for their own TV show, and the production company designed Chiitan, fake otter, to promote the real otter. Chiitan began to gain a robust social media following and…

Point is, Chiitan became the most prominent figure associated with Susaki and a veritable viral star. But Chiitan’s darker tendencies (like drop-kicking people and carrying around a baseball bat to threaten other mascots) eventually led to a Twitter ban and Susaki’s tourism board distancing themselves from Chiitan.

Such is the risk when an unauthorized yuru-kyara goes rogue. 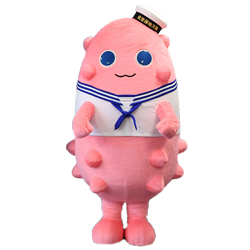 Look at those big eyes! That smile! Doesn’t he just make you want to run out and join Japan’s Maritime Self-Defense Force?

Yes, though Namakoro the pink sea cucumber looks like he sells bubblegum or kitten cuddles, he’s actually an employee of the ministry of defense.

Dig a little deeper on sea cucumbers (who hasn’t done that on a Friday night?) and this actually makes sense. Sea cucumbers don’t run or hide and they can be thickly armored. Intimidating? No. But there’s a non-zero chance I would lose a fight to one. 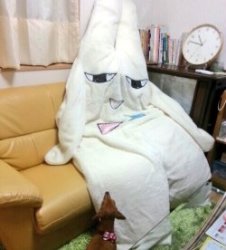 Usasama was designed to be the unofficial mascot of Ryugasaki city, and we can’t figure out just who would hate this fine municipality so much.

The city has nearly a millennium of documented history, the municipal bird is the swan (majestic!), and its 76,000-plus residents don’t deserve to be represented like this.

Mondo Mascots generously describes Ususama as a “lo-fi bunny.” I think it looks more like how I feel every time I wrap up at a buffet. History will be the judge. 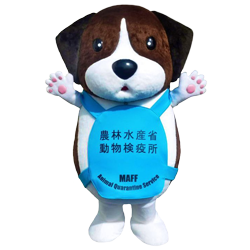 It turns out that it’s far more unsettling when a mascot looks realistic.

Kun-Kun, a mascot for Customs dogs who sniff luggage at Japan’s airports for hidden meat and produce, creates the same tension as the moment when the background music fades in a horror movie. You start searching every corner of the frame for the thing that is being held back.

In the end, you realize Kun-Kun is just a dog. Sometimes, what you see really is what you get. No matter how much you scour for something, a random accessory or slightly threatening personality trait, it’s not there other than what your fevered imagination writes for itself. 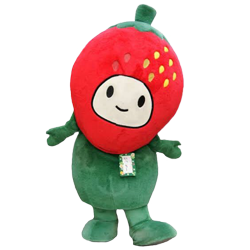 Icchi the strawberry is the mascot for the Noumaru-engei strawberry farm and RV park. A wholesome place to bring your whole family for an afternoon to get back to nature. Make sure to get a picture with Icchi! Just be careful that you come on the right day. 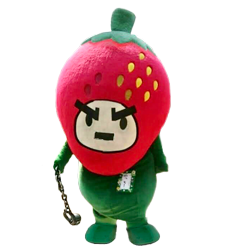 See, on one day a year (good luck figuring out when)Icchi becomes Dark Icchi. If you think a strawberry can’t be threatening, you haven’t seen a strawberry with eyebrows like this.

What makes Dark Icchi dark? Other than suddenly becoming hairier, he’s clearly carrying something. It’s either a leg iron or a full-on medieval flail. Neither of which is remotely strawberry related.

How does a threatening, probably criminal strawberry promote your farm? It certainly wouldn’t be our advice. Unless you represent a renaissance festival, knightly weapons probably don’t test well in your branding. 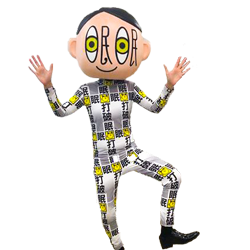 These categories eventually break down. In theory, order represents official mascots—the ones who ask permission before showing up, and do so unarmed. Chaos is…well, the rest.

Nominally, Dahayama Mintaro exists to promote Minmin Daha, which Mondo Mascots describes as, “a medicinal drink to stop busy people sleeping.” But it seems like his real purpose is to show the futility of trying to make sense of the yuru-kyara.

There is no way you can look at this guy and tell me he’s supposed to want what he is selling. He looks like you have to solve a haunted puzzle box to summon him, and once you do there’s no going back.

Also, just call it an “energy drink.” “A medicinal drink to stop busy people sleeping,” makes it sound like a cursed potion. I don’t know why you even need the drink when you could just look into Mintaro’s eyes for 45 seconds and not sleep for a week. 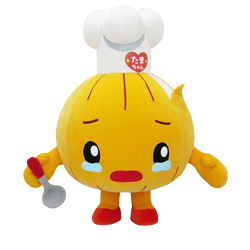 Tama-chan is an onion chef who weeps because he spends his time chopping up other onions.

I need to know who did this to Tama-chan.

Some mascots are notable for their bizarre appearance, or for their seemingly random description. Tama-chan sticks in your mind for the backstory he implies. Both the fictional story of the cannibal onion and the team that designed him.

Because if you were to try to promote tourism to a beautiful area west of Kyoto, and you came up with the saddest possible mascot, it feels like you’re revealing more about yourself than anything else.

Perhaps most upsetting is the thought that, one day, I will have to look my child in the eye and explain Tama-chan to them.

Anyway, visit Hyogo prefecture, where all the onions have regrets!

What do the yuru-kyara serve to teach us, as marketers based in the U.S.?

These characters are not the sort of thing we’re used to in Western marketing. While mascots are not unheard of here, they don’t approach anything resembling the ubiquity of the yuru-kyara.

More than that, mascots in the US tend to stay in their lane. Notwithstanding a trend in the 1990s toward brand mascots getting their own video games (culminating in the actually-kinda-okay Pepsiman PS1 game), we don’t often envision mascots having expanded adventures.

Plus American audiences tend to associate cartoonish mascots with products that are (for better or worse) marketed toward children. Those mascot video games? They served kid-focused brands like 7Up, Pepsi, Cheetos, and Domino’s Pizza.

Without generalizing too much, it’s reasonable to say there’s a greater tolerance and appetite for the cute, campy, and bizarre-seeming in mainstream and professional culture.

Which brings us to a larger point, fully deserving of its own blog post, namely that marketing tools and tactics can change radically between cultures.

It would definitely spice things up from a marketing perspective if we in the U.S. were to employ mascots more often. If we were to start with Kokopelli, how would one build a yuru-kyara-style mascot? 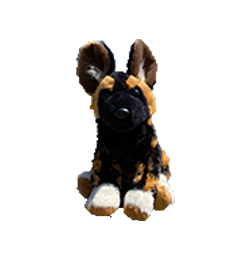 If you’ve been following our Instagram, you probably have met Oscar the Wild, the stuffed African Wild Dog that’s accompanying our crew while they’re filming in Texas. Let’s take Oscar for the base of our mascot.

What are the other components to a truly standout yuru-kyara? To oversimplify the creative process, let’s pick out one accessory and one personality trait that can be relevant or can be totally out of left field.

While there are plenty of accessories that could speak to Kokopelli (dog toys, Colorado Avalanche memorabilia, D&D dice) but for now, let’s go with the electric kettle that helps keep us all on our feet throughout the day.

Now, I can’t decide between a relevant or wildly irrelevant personality trait, so let’s go with one of each. Oscar is an expert graphic designer who also happens to be lactose intolerant.

So, we have Oscar the Wild, an African Wild Dog with an electric kettle for a hat who works as a graphic designer and always takes his coffee black. If that doesn’t scream “creative agency,” that’s part of the magic. 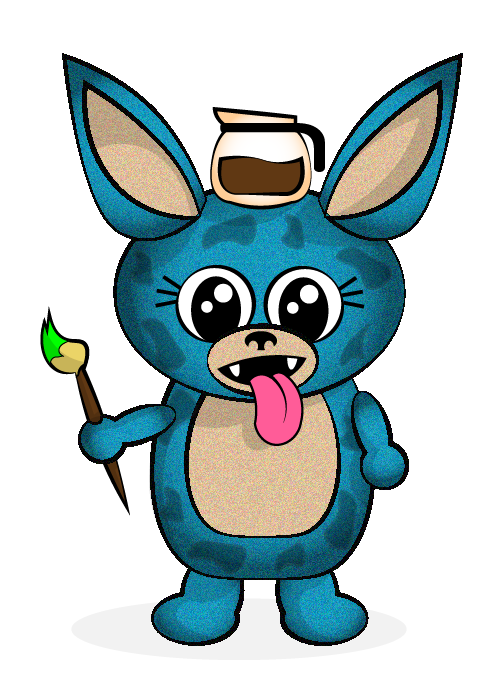 If you think you could come up with a better mascot, remember that with yuru-kyara, unofficial mascots are a thing. These are people who make their own costumes and kind of just show up. There’s no better way to explain it because there’s literally no rules.

If you have the fabric, hot glue gun, time, and energy try throwing one together yourself! You might soon find you’ve become the symbol of your local water treatment facility, bagel shop, or soil erosion awareness campaign.

And if you do, please, PLEASE, take pictures.